What is Cold Aisle Containment?

What is Cold Aisle Containment?

Data centers have become a very important yet seldom seen part of our daily lives. They can be defined best as facilities which maintain all of the computer systems and components of a given network. Being so important, you would be right in thinking that a lot goes into their preventative care, specifically when it comes to their environment. The first priority is the energy supply and so redundant systems are often installed as a backup power source in case of an emergency. Supplying enough power is especially important considering a large scale data center can consume as much electricity as a small town. Redundant data communications connections are another preventative measure often taken should there be an incidence of device or utility failure.

Although they are sometimes the most complex level of protection, environmental controls are probably the most important. The physical qualities of the air within a certain range are necessary to receive the optimal performance of the technology; these involve the environmental controls. At its most simple, some of these controls include things like fire alarms and suppressants or air conditioners which filter the air and help to cool it. Relatively, humidity is a major concern because of the threat it can pose to the performance of the systems so dehumidifiers are often used to control the level.

How Does Aisle Containment Work?

Both hot and cold aisle containment can improve the functionality and the efficiency of the standard control room cooling systems. While both of these methods can minimize the combining of hot with cold air, there are distinct reasons why some companies implement one over the other, depending on work environment conditions and the accessibility of systems already in place. 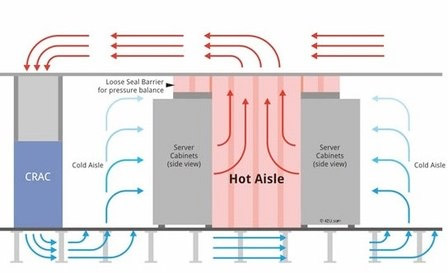 According to a 2016 research study published by researchgate.net:

Using proper air distribution to reduce or to prevent the hot air re-circulation and/or the cold air bypass is effective and to be efﬁcient thermal management of data centers. In practice, avoiding mixing of hot and cold air mixing is a key for efﬁcient data center cooling strategies. Hence containment of hot-aisle or cold-aisle throughout the data center is an important thermal management and energy saving strategy.

Temperature control can be reached in many ways, one of which is refrigeration, but a frequently imposed solution is separating the hot air from the cool air as is accomplished with hot or cold aisle containment. Containment of hot and cold aisles is meant to minimize the warming effect that exhaust air may have on the server room. The main idea of hot and cold aisle containment is using something like ducting to channel away hot air from the device cabinets while pulling cool air into the server room. The cabinets, in this design, are arranged in pairs that are facing each other so that the cool air can easily reach the air intakes (cold containment) and the warm air is led away (hot containment) so the two will never mix. Other options employed in hot containment can be the use of blanking panels, hard panel boards and PVC curtains in place of or augmenting duct work.

Peak performance is the main focus of another set of environmental controls. Air flow management, for example, is used to provide the efficient cooling of the center’s computers through the re-circulation of hot air exhausted from the machines. Temperatures recommended for data centers and similar facilities range from 68–75 °F (20–24 °C), although some studies have suggested that any temperature below 70 °F (21 °C) may waste energy. Overheating of the machines in the data center can result in the loss of performance or even complete failure of the devices. Over-cooling, alternatively, can lessen performance when used in areas of high humidity because it can lead to moisture and consequentially salt deposits to build up in the circuitry.

Another approach is the use of ventilated flooring tiles to build a containment system that controls the air flow directly to the cabinets. Average ambient temperature, ventilation leakage and server tolerance all go into the deciding the level of containment which is necessary for each specific data center.

In the end though, hiring a company who specializes in aisle containment is your best bet to finding a solution that best suits the needs of your industry.